Trouble Hearing? It Could be TMD 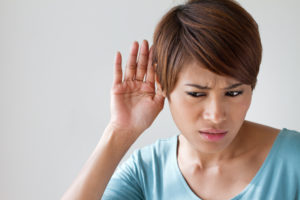 According to the American Tinnitus Association, a staggering fifty million Americans experience the constant, noticeable, ringing or buzzing in their ears known as tinnitus. Tinnitus can range in severity from slightly annoying to bothersome, and for a small portion of the population, it can be unbearable. But while there are many potential causes for tinnitus, one such cause may surprise you: temporomandibular joint disorder or TMD. We spoke to Dr. Alexandra George of Pittsburgh, Pennsylvania about why TMD and tinnitus often go hand-in-hand and what you can do about it.

TMD is a condition of the temporomandibular joint muscles of the jaw. It is estimated that this puzzling condition affects approximately 10 million people a year in America. There is no one cause for TMD nor is there one tried and true treatment. TMD can be caused by any number of things, such as genetics, accidental injury or improper bite. TMD can also cause a wide variety of symptoms, from jaw soreness and tightness to headaches, neck, sinus, and eye pain- and even tinnitus-based hearing loss, which scientists believe could be caused by the TMJ muscles throwing the nerves in the ears out of balance.

“It makes sense,” George said. “After all, the temporomandibular joint is directly below the ear. If you’re experiencing pressure on that joint, it’s not surprising that the ear bears some of the brunt of that.”

So, when should you suspect you may be experiencing the effects of TMJ-based tinnitus?

“The first thing you should do if you think you may have a TMJ disorder is to make an appointment with your dentist, or a dentist who specializes in treating TMD,” George said. “We have tools we can use in the office to test muscle activity and jaw movement to determine if you have TMD or something else.”

From there, George says a treatment plan will be developed, which may include a custom orthotic that the patient can wear to help reposition the jaw and ease some of the symptoms of TMD. According to George, the patient may even experience relief from TMD-related tinnitus simply by wearing the orthotic, but it is not uncommon for patients to need further treatment beyond the orthotic stage. Permanent solutions may include braces, crowns or continued wear and periodic adjustment of the orthotic.

“After the patient becomes symptom-free and remains symptom-free for a couple of months, we discuss the options to maintaining this jaw position with a permanent solution,” George said. “Usually once we’ve aligned the jaw, most of the symptoms of TMD go away. The important thing to remember is that you don’t have to needlessly suffer from TMD. There is help out there.”