This Healthy Snack May be Harming Your Children’s Teeth 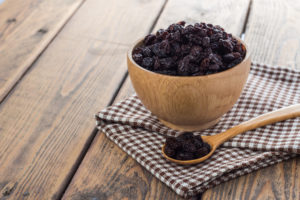 Summer may not be over just yet, but with many kids heading back to school next month, some parents may already be thinking about the best foods to pack in their children’s lunchboxes. But while it’s easy to see that some foods are healthier than others, a recent study has revealed that one category of healthy foods may not be as good for your teeth as you bargained for.

According to a report published by the the Royal College of Surgeons in London, England, dried fruits including apricots, cranberries and the old lunchbox favorite, raisins are terrible for your teeth! Dr. Alexandra George of Wexford, Pennsylvania understands the confusion parents may face around these sweet treats.

“You look at a raisin or a dried apricot and think fruit equals healthy,” George said. “Yes, it’s full of sugar, but it’s good sugar. But the problem is that in the dehydration process these fruits become so sticky, eating them is literally like gluing sugar to your teeth.”

The initial London-based study was conducted after an alarming number of preschool-aged children required tooth extractions due to decay in the United Kingdom. Here in the United States, the numbers aren’t much better. According to the Centers for Disease Control and Prevention, 20 percent of children between the ages of 5-11 have at least one untreated decayed tooth, with those numbers only slightly lower for older age groups.

“Poor oral health among children is a very real problem, but even the most diligent parents could be making a harmful mistake by unknowingly feeding their children the wrong foods,” said George. “We’re not saying throw away the raisins forever, but maybe save them for an after-school treat so your kids can brush their teeth once they’ve finished.”

So, what about the fresh varieties of the same fruits?

“Fresh grapes, apricots or cherries don’t pose the same risks to your teeth as dehydrating them does. Yes, they still have plenty of natural sugar, but they don’t cling to your teeth the same way dried fruit does,” said George. “If you’re going to pack any of these fruits for your kids, opt for the fresh variety over the dried, and pack your child a refillable bottle of water to go with it. Try to limit fruit juices, too, because they’re also full of sugar and bad for the teeth, not to mention they lack all that beneficial fiber we get from fresh fruit.”