The Shocking Way Stress Could Ruin Your Smile 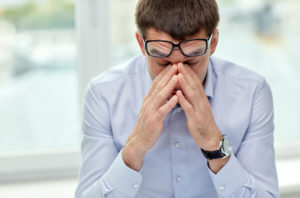 It all started on The Tonight Show with Jimmy Fallon, the popular NBC variety show that regularly gets celebrity guests to reveal shocking bits of information about themselves. The storied show’s most recent shocking moment came quite literally from the mouth of actress Demi Moore when she revealed she’d lost her two front teeth to stress. Naturally, that admission left a lot of people wondering “Can you really lose a tooth to stress, and if so am I at risk?”

Wexford, Pennsylvania dentist Dr. Alexandra George says yes, you can lose teeth to stress, but it may not be as bad as you think.

“I think when Demi Moore said she lost a tooth to stress a lot of people imagined her tooth just fell out with no warning, and they immediately wondered if it could happen to them,” said George. “But the truth is in most cases you’d see a lot of red flags before your tooth just simply fell out.”

Tooth Truth: Stress Can Ruin Your Smile, But Only if You Let It

One red flag that may act as a precursor to tooth loss is tooth grinding, which can eventually wear down or crack teeth. Called bruxism, tooth grinding can happen to anyone at any time and doesn’t even need to be caused by stress. In fact, some studies suggest it may be genetic. Bruxism is particularly dangerous because often we do it in our sleep, and when we’re awake we may not even realize we’re doing it.

Another way stress can harm your smile is through inflammation which can be caused by chronic stress.

“When we’re stressed, cortisol levels in our bodies can increase, which may lead to inflammation of the gums,” said George. “This can cause or exacerbate a disease known as periodontitis, which can damage the soft tissues in your gums, and even damage the bones of the jaw, causing tooth loss.”

Other ways stress can contribute to tooth loss include a decrease in oral hygiene including forgetting to brush or floss, neglecting dental exams, and ignoring signs of dental problems such as tooth pain or cracking.

Thankfully, according to George, these problems are almost always preventable.

“For bruxism, you can get a mouth guard to offset some of the pressure on your teeth when you grind them,” said George. “For the other problems like neglecting your oral health or skipping dental exams, stop doing that! Life gets tough, but it’s not worth losing your teeth.”