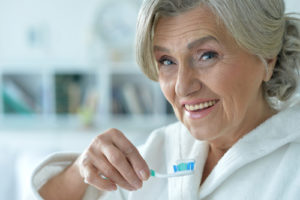 Osteoporosis is a bone disease that causes both the loss of bone and the inability to grow new bone tissue. The condition is most common in women over the age of 60, but it can strike men or women at any age. Researchers at the National Osteoporosis Foundation (NOF) estimate that approximately 54 million Americans have osteoporosis, and that number is only going up. In fact, the NOF believes that by the year 2025, osteoporosis will cause an estimated 3 million fractures a year.
Now, a study from the University at Buffalo has found that in addition to helping to increase bone density and decrease bone breakage, treating osteoporosis has another surprising benefit: preventing periodontitis. In fact, researchers found that patients undergoing estrogen therapy for osteoporosis had a 44 percent lower chance of developing periodontitis than women who did not treat their osteoporosis.

The University at Buffalo study followed 500 post-menopausal women. Of those 500 subjects, 356 women were diagnosed with osteoporosis, with 113 undergoing estrogen therapy to treat the disease.

Dr. Alexandra George of Wexford, Pennsylvania, believes that though researchers have been unable to explain the reason for this decrease, there could be many factors at play.

“Essentially what’s happening is that, because the estrogen therapy is keeping the bones dense, there is less bone loss in the mouth as well,” she says. “This includes the teeth.”

This means that in addition to the teeth staying stronger, gums remain healthier and less inflamed.

“Inflammation of the gums is what causes gum disease and periodontitis,” George says. “And this can lead to tooth, tissue and bone loss if not treated.”

But while the benefits of estrogen therapy in osteoporosis and now periodontitis are plain to see, George believes there may be one other factor at play as well.

“While the estrogen clearly is helping repair damage from osteoporosis, another reason for these numbers could be that women in this group may take better care of their health overall,” she says. “This includes brushing twice a day, flossing and visiting the dentist twice a year, which are all ways to both reduce your risk for periodontitis and also stop it before it causes any permanent damage to your teeth and gums.”